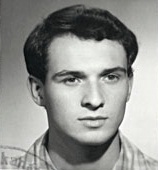 
On November 17 each year we commemorate International Day of students and the Czech national holiday commemorating the struggle of students for freedom and democracy. On that day in 1969 student Jan Palach set himself on fire in order to protest the Soviet invasion in Czechoslovakia in 1968. Further protests in 1989 launched the beginning of the Velvet Revolution that brought freedom and democracy back to Czechoslovakia.

Come and see a documentary about Jan Palach’s life that includes interviews with his family and friends, shots from his funeral and demonstrations that followed after his death. After the screening you are welcome to discuss Jan Palach’s legacy with film director Mrs. Kristina Vlachová.

In Czech, 57 minutes. RSVP by filling out the registration form below.